Remembering the past: Immune response solidifies the chiropractic profession

Editors Note: The information provided here was forwarded to Planet Chiropractic by a chiropractor in Texas. Far too many people (including chiropractors) are not aware of historical events that took place during the 1917 – 1918 Spanish Flu years, which involved chiropractors caring for thousands that suffered influenza infection during those times. With such a firestorm of media coverage and fear surrounding the Swine Flu Pandemic, it would be irresponsible not to attempt seeking knowledge regarding influenza events of the past. 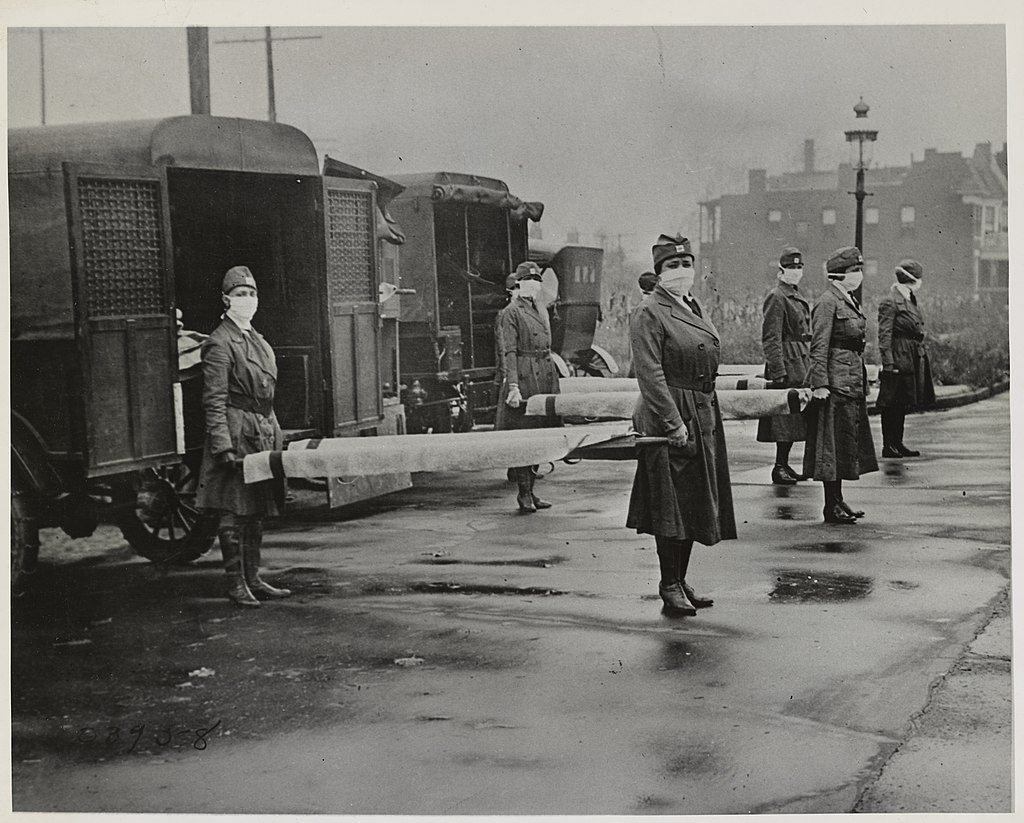 The Official History of Chiropractic in Texas

Published by the Texas Chiropractic Association — 1978

“The 1917 – 1918 influenza epidemic swept silently across the world bringing death and fear to homes in every land. Disease and pestilence, especially the epidemics, are little understood even now and many of the factors that spread them are still mysterious shadows, but in 1917-1918 almost nothing was known about prevention, protection, treatment or cure of influenza. The whole world stood at its mercy, or lack of it.”

“But out of that particular epidemic, the young science of chiropractic grew into a new measure of safety. While many struggles would lie ahead this successful passage of the profession into early maturity assured its immediate survival and made the eventual outcome of chiropractic a matter for optimism. If there had been any lack of enthusiasm among the doctors of chiropractic, or a depleting of the sources of students then the epidemic took care of them too. These chiropractic survivors of the flu epidemic were sure, assured, determined, and ready to fight any battle that came up. The effect of the epidemic becomes evident in interviews made with old-timers practicing in those years. The refrain comes repeatedly,”

1. ‘I was about to go out of business when the flu epidemic came – but when it was over, I was firmly established in practice.’

“Why? The answer is reasonably simple. Chiropractors got fantastic results from influenza patients while those under medical care died like flies all around.” “Statistics reflect a most amazing, almost miraculous state of affairs. The medical profession was practically helpless with the flu victims but chiropractors seemed able to do no wrong.”

“In Davenport, Iowa, 50 medical doctors treated 4,953 cases, with 274 deaths. In the same city, 150 chiropractors including students and faculty of the Palmer School of Chiropractic, treated 1,635 cases with only one death.” 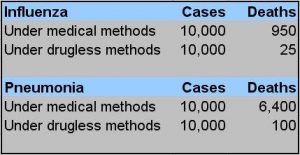 “Statistics alone, however, don’t put in that little human element needed to spark the material properly. Dr. S. T. McMurrain [DC] had a makeshift table installed in the influenza ward in Base Hospital No. 84 unit stationed in Perigau, in Southwestern France, about 85 kilometers from Bordeaux [during WWI]. The medical officer in charge sent all influenza patients in for chiropractic adjustments from Dr. McMurrain [DC] for the several months the epidemic raged in that area. Lt. Col. McNaughton, the detachment commander, was so impressed he requested to have Dr. McMurrain [DC] commissioned in the Sanitary Corps.”

3. “Dr. Paul Myers [DC] of Wichita Falls was pressed into service by the County Health Officer and authorized to write prescriptions for the duration of the epidemic there – but Dr. Myers [DC] said he never wrote any, getting better results without medication.”

Dr. Helen B. Mason [DC], whose “son, when only a year old, became very ill with bronchitis. My husband and I took him to several medical specialists without any worthwhile results. We called a chiropractor, as a last resort, and were amazed at the rapidity of his recovery. We discussed this amazing cure at length and came to the decision that if chiropractic could do as much for the health of other individuals as it had done for our son we wanted to become chiropractors.”

Dr. M. L. Stanphill [DC] recounts his experiences: “I had quite a bit of practice in 1918 when the flu broke out. I stayed (in Van Alstyne) until the flu was over and had the greatest success, taking many cases that had been given up and restoring them back to health. During the flu we didn’t have the automobile. I went horseback and drove a buggy day and night. I stayed overnight when the patients were real bad. When the rain and snow came I just stayed it out. There wasn’t a member of my family that had the flu.”

When he came to Denison he said: “I had a lot of trouble with pneumonia when I first came. Once again took all the cases that had been given up. C. R. Crabetree, who lived about 18 miles west of Denison, had double pneumonia and I went and stayed all night with him and until he came to the next morning. He is still living today. That gave me a boost on the west side of town.”

“And when interviews of the old timers are made it is evident that each still vividly remembers the 1917-1918 influenza epidemic. We now know about 20 million persons [recent estimates are as high as 100 million deaths] around the world died of the flu with about 500,000 Americans among that number. But most chiropractors and their patients were miraculously spared and we repeatedly hear about those decisions to become a chiropractor after a remarkable recovery or when a close family member given up for dead suddenly came back to vibrant health.”

“Some of these men and women were to become the major characters thrust upon the profession’s stage in the 20’s and 30’s and they had the courage, the background and the conviction to withstand all that would shortly be thrown against them” [including being thrown in jail for practicing medicine without a license].

“The publicity and reputation of such effectiveness in handling flu cases also brought new patients and much acclaim from people who knew nothing of chiropractic before 1918.”

4. “The first survival factor for chiropractic: they were the legal and legislative salvation. But the fabulous success of chiropractic in combating the 1917-1918 influenza outbreak was the public relations breakthrough that can certainly be called the second great survival factor. Better acceptance by the public followed and more patients meant financial safety for practicing chiropractors. Dedicated chiropractors came into the profession in increasing numbers and they had a sure sense of certainty, heady conviction, and a great willingness to fight for the cause.”